“An exciting, boundary-defying performer – Pine displays a power and confidence that puts her in the top echelon.”

“Striking and charismatic…she demonstrated a bravura technique and soulful musicianship.”

Heralded as a leading interpreter of the great classical masterworks, American concert violinist Rachel Barton Pine thrills international audiences with her dazzling technique, lustrous tone, and emotional honesty. With an infectious joy in music-making and a passion for connecting historical research to performance, Pine transforms audiences’ experiences of classical music.

In September 2022, Cedille Records released Violin Concertos by Black Composers Through the Centuries: 25th anniversary edition which features Pine’s new recording of Price: Violin Concerto No. 2 with the Royal Scottish National Orchestra and Jonathon Heyward, and reprisals of her 1997 recordings of masterworks by Joseph Bologne, Chevalier de Saint-Georges (1775), José White Lafitte (1864), and Samuel Coleridge-Taylor (1899). In March 2023, Pine’s performance of Jandali: Violin Concerto No. 2, recorded with the Vienna Symphony Orchestra and Marin Alsop, will be released on an album of Jandali concertos.

This season Pine joins composer Jessie Montgomery for a Chicago Symphony Orchestra MusicNOW performance of a work written for Pine. Her solo appearances include engagements with the Berkeley Symphony, the Chicago Sinfonietta, and the Grand Rapids Symphony. She also performs for LMMC Concerts in Montréal and with harpsichordist Jory Vinikour at Milwaukee’s Early Music Now. Additionally, she appears on the Purdue University Northwest Sinai Forum series, which also presents other respected names such as Elizabeth Gilbert and General David Petraeus. 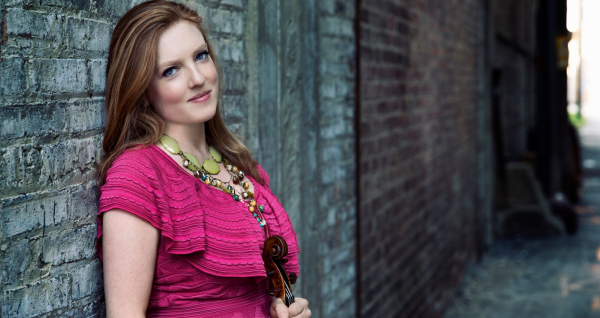 In addition to her regularly scheduled performances, Pine has subbed in for her fellow soloists for a number of incredible concerts. Most notably, in 2021, with just 3 1/2 hours’ notice, Pine performed Prokofiev’s Violin Concerto No. 1 at Ravinia with the Chicago Symphony Orchestra and Marin Alsop in place of Midori.

She has appeared on The Today Show, CBS Sunday Morning, PBS NewsHour, Prairie Home Companion, NPR’s Tiny Desk, NPR’s All Things Considered, and Performance Today, and in the Wall Street Journal and the New York Times. She holds prizes from several of the world’s leading competitions, including a gold medal at the 1992 J.S. Bach International Violin Competition.

She writes her own cadenzas and performs many of her own arrangements. With the publication of The Rachel Barton Pine Collection, she became the only living artist and first woman in Carl Fischer’s Masters Collection. During the pandemic, she performed the entire solo violin part of 24 different violin concertos, live and unaccompanied, for her weekly series “24 in 24: Concertos from the Inside.”

Pine’s discography of 40 recordings includes Dvořák and Khachaturian Violin Concertos (Teddy Abrams and the Royal Scottish National Orchestra); Brahms and Joachim Violin Concertos (Carlos Kalmar and the Chicago Symphony Orchestra), and Elgar and Bruch Violin Concertos (Andrew Litton and the BBC Symphony Orchestra). Pine and Sir Neville Marriner’s Mozart: Complete Violin Concertos with the Academy of St Martin in the Fields and her Bel Canto Paganini both charted at number three on the classical charts. Pine’s Testament: Complete Sonatas and Partitas for Solo Violin by Johann Sebastian Bach and Violin Lullabies debuted at number one. Her recent Blues Dialogues is an album of blues-influenced classical works by 20th- and 21st-century Black composers.

An active philanthropist, Pine has led the Rachel Barton Pine (RBP) Foundation for over two decades. Early in her career, she noticed that young people learning classical music seldom have the opportunity to study and perform music written by Black composers. Since 2001, Pine and her RBP Foundation’s Music by Black Composers (MBC) project have collected more than 900 works by 450+ Black composers from the 18th–21st centuries. MBC curates free repertoire directories on its website and publishes print resources, including pedagogical books of music exclusively by global Black classical composers and the Rachel Barton Pine Foundation Coloring Book of Black Composers. Additionally, the RBP Foundation assists young artists through its Instrument Loan Program and Grants for Education and Career. Pine also serves on the board of the Sphinx Organization and other not-for-profits.

She performs on the “ex-Bazzini, ex-Soldat” Joseph Guarnerius “del Gesù” (Cremona 1742), on lifetime loan from her anonymous patron.

All of Pine’s bios may be found here