When two gifted solo performers collaborate, the results can vary. Happily the results were positive when violinist Rachel Barton Pine and harpsichordist Jory Vinikour came together to make a fine recording, released last year, of J. S. Bach’s six sonatas for their combined instruments. The pairing sounded even better in person than on disc, when they performed two of these sonatas on the free concert series of the National Gallery of Art Sunday afternoon.

As Barton Pine explained in her informative commentary between pieces, she was playing on a violin Nicolò Gagliano made in 1770. This instrument has remained in its original state, with no alteration to the fingerboard and string tension. With gut strings and a Baroque style bow, it is capable of an extremely delicate tone.

Ernest Chausson’s four-movement Concerto in D Major for Violin, Piano, and String Quartet (1891) is neither concerto nor sonata nor symphony, but it somehow manages to be all three, especially when played with fire and conviction by an accomplished soloist.

Those incendiary and emotional elements were on vivid display at the Valley of the Moon Festival on Sunday afternoon. Playing in the surprisingly good acoustics of the Hanna Boys Center auditorium in the town of Sonoma, soloist Rachel Barton Pine and five colleagues brought down the house with an inspired performance of Chausson’s rarely heard masterpiece. 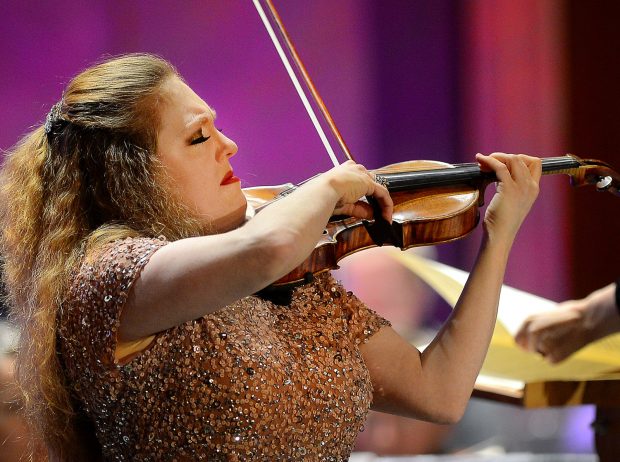 Taking the stage in a sparkling, long, flowing gold dress, Rachel Barton Pine brought a different feel to The Maryland Theatre on Sunday.

Pine, a world-renowned violinist who was performing with the Maryland Symphony Orchestra, was exposing the crowd to Dmitri Shostakovich, a Russian-born, 20th-century composer and pianist who led a difficult life under the Soviet government and was accused of writing inappropriate music.

Violinists often take on a movement or two of a Bach sonata or partita to show off their chops. Unaccompanied, the violinist is out there alone to roll out harmonies and contrapuntal textures that you’d think would be impossible with a bow on a single stringed instrument. Usually, what is most impressive about such efforts is the athleticism and agility of the violinist. Who hasn’t wondered at the technique involved in a performance of the famous “Chaconne”?

Pine’s Time: Rachel Barton Pine opens up about tackling Mozart, becoming a confident composer, and being a mom

Rachel Barton Pine is living the dream. At 40, she’s raising a three-year old budding violinist, writing and publishing her own cadenzas, and she’s just released her 24th album, Mozart’s Complete Violin Concertos and the Sinfonia Concertante, K364 (Avie) with Sir Neville Marriner conducting the Academy of St Martin in the Fields.

For Paganini, a Wild and Devilish Lifestyle Fueled Some Virtuoso Compositions

Two hours of Paganini can lead to fatigue for the listener (to say nothing of the performer), but Ms. Pine illuminated the poetic moments within the bombast of the caprices, each of which focuses on a different technical element.

Music to My Ears: What the classical world has been listening to this month

I have been enjoying listening to Hopkinson Smith’s recording of Bach’s Violin Sonatas and Partitas played in his own transcriptions for lute. There are many moments of implied harmony in these works – in your ear, you hear chords that are not written on the page – and I have had these in my brain for years.

If you’ve ever wanted to hear a virtuoso violinist play a brilliant concert on an exquisite instrument, you had your chance Saturday evening at the Sonia Vlahcevic Concert Hall at Virginia Commonwealth University.

No. 5 is a fiery and theatrical work, ripe in bravura writing but full of satisfying material and greatly deserving of revival. The work’s virtuosic demands were brought off fabulously by Barton Pine, balanced by sweet lyricism that demonstrated her genuine musicality and comprehensive understanding.

After Adversity, a Passion Unchecked: Years After a Calamity, Rachel Barton Pine Prospers

Asked by a student about her musical inspirations after a recent Baroque master class at Juilliard, the violinist Rachel Barton Pine gestured toward the stickers of heavy metal bands plastered on her violin case. “When they’re onstage, they’re getting everyone headbanging, ” she said.

Virtuoso violinist Rachel Barton Pine is known worldwide for the powerful music she coaxes from strings, but these days, she plays especially for an audience of one. Sylvia.

No more posts to load.